Since my wife, Terri, was a little girl, one of her wildest dreams was to one-day experience a magical vacation to Hawaii.  When I married Terri, the girl of my dreams, I told her that I would show her the world.  Following through with my promise, I’ve taken her to China, Norway, the Caribbean, and Alaska, but the dream destination from her childhood still called out to her.  Millions of people dream of going to Hawaii, a destination of romance often seen in movies and television.   The time was now for my wife Terri, a small-town mid-western girl, to live out her dream of vacationing in Hawaii, however; because she’s married to a Cruise Journalist, we embarked on the perfect Hawaiian cruise aboard Norwegian Cruise Line’s Pride of America.   Cruising the Hawaiian islands aboard the Pride of America is a gleaming, dreamy, unique experience within the cruise industry because of the ship, the itinerary and the American crew who work onboard. Hawaii is such a friendly place where the locals make you feel like family.  The customary orchid lei and a warm “Aloha” greeting, set the tone for a relaxed feeling as you board the Pride of America.  You’ll soon get use to saying “aloha”, which means both hello and good-bye, and you’ll also find yourself saying “mahalo”, the Hawaiian word for thank you.  A cruise departure from Honolulu has risen to the top of my list as one of the most beautiful ports to cruise out of.  Pride of America departs at 7:00pm just as the sun is setting, and the lights of Waikiki glisten with the Diamond Head landmark as a backdrop.

Pride of America has a comfortable, welcoming interior design with rich colors and American-themed décor.   The two main dining rooms are called the Liberty and Skyline Restaurants, both have a very elegant setting; Liberty with a very patriotic red, white and blue décor and Skyline with an art deco design.  Norwegian Cruise Line invented Freestyle Dinning, so with twelve dining venues the chances of going hungry are slim.  Our favorite restaurants were Jefferson Bistro, offering French cuisine, and Teppanyaki that has an entertaining and talented Japanese chef cooking on a grill surrounded by about eight hungry passengers. Seven of the twelve dining venues had an extra charge, ranging from $10 - $25 dollars per person.  If you have a particular craving for pizza anytime and anywhere on the ship, just call it in and make your order, for five-bucks a piping hot pizza will arrive just like back home.  I like to think of myself as a pizza connoisseur, and I must say that the pizza we ordered was perfect! Accommodations onboard are comfortable with a refrigerator and the usual amenities available in most fine hotels, and many categories have private verandahs.  My wife has instructed me to find out how we can buy one of the Pride of America beds, because they were so comfortable.  From sea to shining sea, America the beautiful is seen in the interior design and décor with samples from the South, the East, the Midwest and the West Coast.  I was impressed with the Guest Services area on Deck Five with it’s grand stairs, red carpet, white banisters, columns, and an atrium dome with frescos lining the ceiling area that reminded me of the artwork I’ve seen in Rome.  A fantastic image of the Great Seal from the United States of America, covers the floor of the Guest Services area, and makes a patriotic first impression when boarding the ship. 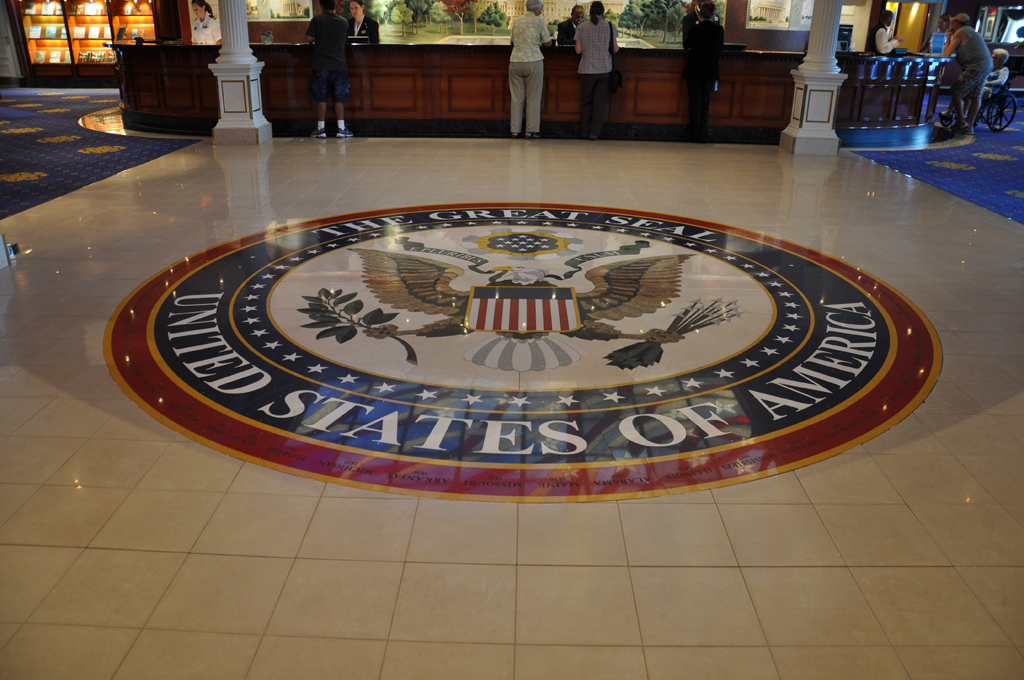 The Pride of America certainly makes a bold and proud impression as a physical resort at sea, and yet it’s the fantastic Hawaiian itinerary that is perhaps the biggest attraction.  Pride of America is the only cruise ship in the industry allowed to embark passengers in Honolulu, cruise the Hawaiian islands and disembark passengers again in Honolulu on a seven-day itinerary.  Unique within the cruise industry, the Pride of America is a U.S. registered vessel that fully complies with the Jones Act of 1920, a United States Federal statute regulating maritime commerce between U.S. ports.  The usual choices for internationally operated cruise ships to cruise the Hawaiian Islands requires embarkation for example, from the mainland, which is a four-night voyage at sea just to get to Hawaii, then these ships can cruise the islands, but must make the journey back to the mainland again, resulting in a cruise length of at least fourteen days.  Pride of America, on the other hand, is exclusively allowed to offer a seven-night cruise beginning and ending in Hawaii, so her itinerary is unique.  Embarkation is in Honolulu and the first port is Maui, where the ship is docked for two full days.  Next, Pride of America cruises to the Big Island of Hawaii to Hilo, then to Kona.  Finally, passengers have another full day and a half in the beautiful port Kuaui, before returning to Honolulu.  Our favorite ports were Maui and Kuaui, mostly because these islands seemed more lush and tropical.  After departing Kauai around 1:30pm, make sure you’re on-deck at 5:00pm because Pride of America cruises along the Na Pali Coast, offering an incredibly beautiful and scenic view of the rugged mountains. The highlights of this Hawaiian itinerary, and what most passengers want to see when they go to Hawaii are the volcanoes, the whales, the beaches and to experience a Hawaiian Luau.  Whale-spotting is seasonal, only in the winter months from November through May, because this is when the Humback Whales migrate from Alaska to Hawaiian waters for mating.  Perhaps the most popular excursions offered are to see the active volcanoes on the Big Island from Hilo.  My wife and I rented a car in Maui and we explored the island a bit.  The ship tenders into Kona, and the visit to this quaint town is worthwhile because most of the highlights are within walking distance.  A visit to Hawaii wouldn’t be complete without experiencing an authentic luau.  Norwegian Cruise Line has found an excellent luau production in Kuaui where the roasted pig and the show bring to life a traditional Hawaiian story with music and dancing by local performers.  The food was delicious, and there was an open-bar included in the excursion. One particular feature that makes the Pride of America one of the most unique ships in the cruise industry is her mostly American crew.  With a crew ratio of 75% Americans and 25% international, I was looking forward to experiencing such a high concentration of Americans working on a cruise ship.  With this unique U.S. registration, the ship must be operated under American labor laws, so the crew are paid overtime and wages just like any other company in America. The operating costs of the Pride of America alone, are equal to that of four internationally registered Norwegian Cruise Line vessels, which is why great care and attention is given to make sure passengers have the Hawaiian vacation of a lifetime.  I boarded the Pride of America, not knowing what to expect, and after our cruise, I was impressed with the attentiveness and quality of service offered by the crew.

You need to be a member of Cruise Talkshow to add comments!